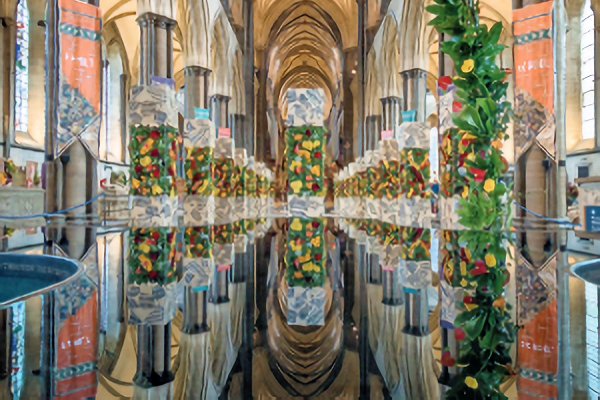 The Queen’s long life and reign will be one of the central themes of Salisbury Cathedral’s 2022 flower festival, Celebration: A Festival of Flowers.

As well as marking Her Majesty’s long reign, the festival also celebrates the Cathedral past and present with displays reflect the magnificent Gothic setting. Material from the Cathedral library is incorporated into some displays in the form of the Theatricum Botanicum by John Parkinson, James I’s Royal Apothecary and chief botanist to Charles I. This 17th century treasure will be on display alongside the arrangements that interpret it.

At the heart of the Cathedral, a replica of the Queen’s coronation robe made from purple pampas grass, gilded dried foliage, and ferns forms a centrepiece, standing in front of the High Altar, which will be draped in the blue English silk altar cloth material used at the Queen`s coronation in 1953. A display re-imagining Royal Nursery in pastel colours dominates the West End and garlands referencing the garlands hung in Westminster Abbey for the coronation will be hung in the Cathedral Quire.

Within this sumptuous ad celebratory display there is an underlying theme of sustainability, with jam jar displays replacing arrangements that would previously have used foam. Recycled materials are also re-purposed in hanging arrangements around the Cathedral Cloisters.